Switching to Philo from Sling: My Thoughts on the Streaming Value Winner 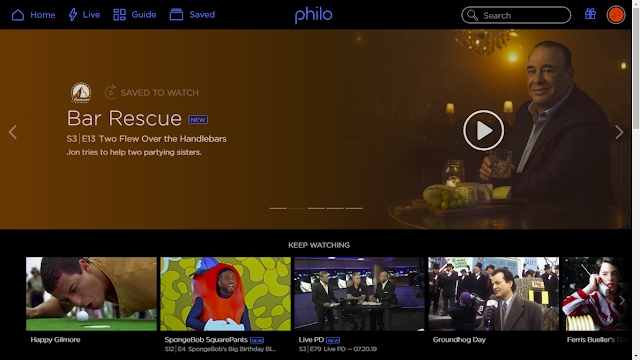 Let me just say that I don't dislike Sling, in fact I still recommend it. However, I've been eyeing Philo from afar for a while now for a few reasons. First, I am a strange person, and I like having access to MTV Live, and MTV Classic: two channels that while I haven't really watched them for any extended period of time, I respect the fact that they exist. Second, the price: $20. How did Philo get there? They don't have channels that have sports, as well as no local networks.

The three big companies that provide sports programming are Disney/Fox, WarnerMedia, and Comcast. That means in addition to no sports from them, Philo doesn't have access to their general entertainment content. I can only assume this is due to these companies bundling their entertainment channels with sports channels. You can't get FXX without also carrying Fox Sports 1 and 2, or something like that. Is it a big loss? Kind of. Sure, I'll miss Conan on TBS. I'll miss movies on FX. I'll miss Cash Cab on Bravo. Were they worth the extra $20? I don't think so. While I had access to TBS, I watched Conan clips on YouTube, I can watch movies on whatever the next streaming services will be, and I can watch reruns of Cash Cab on the Game Show Network. At this time, it would be smart for the three conglomerates who aren't on Philo to jump on board, considering that not all people want access to sports, and don't want to pay for those sports channels. I recognize that the expensive sports channels rake in tons of cash, however, if these companies want their brands to survive, they have to understand that they will be losing a lot of value by removing themselves from an entertainment platform like Philo. While this is difficult for the WarnerMedia channels, as TBS, TNT, and TruTV all carry sports content, leaving only CNN, TCM, and Cartoon Network; Comcast and Disney/Fox could bring their entertainment channels like FX, FXX, Freeform, Disney Channel, Bravo, E!, SyFy, and others, maintaining their brand to a low-cost service for consumers who don't want sports. I'd love to still receive these channels, I just don't want to pay for what I don't care for. If Disney, Comcast, and WarnerMedia all care about investing in streaming platforms designed around providing entertainment content, they might as well do so for a service like Philo.

The experience of Philo is better than Sling. I've been using Sling on-and-off for almost three years, and in that time, the UI hasn't changed very much. They added a guide, and the "My TV" tab is nice, but it never felt complete; there was always something off about the experience. Philo feels modern, and fits well into the streaming world we've become accustomed to. Users can create their own profiles to fit their TV watching patterns, where they can choose their favorite channels, and shows, and get recommendations based on them. The "Keep Watching" tab stores shows and movies that haven't yet been completed, including shows that were watched live, without needing to be told to save them. This is also a feature on Sling, but not all channels support that functionality. Users also get a list of trending live shows to see what other users are also watching, which I really like. In addition, there are also lists of top shows, what you've saved, and new upcoming episodes and shows. In the saved tab are all the shows the user has saved, and when a show airs, it DVRs it into your list. The reliability is just as good as Sling, which was excellent.

One thing I really like about Philo is how it treats live shows. Everything can be rewound, regardless of a show's appearance in your saved shows list. This means the user can set their profile to automatically play a live show from the beginning. For users who are used to an on-demand streaming platform, this is a big deal in bringing value to linear channels. The service also places an emphasis on on-demand content. Philo treats shows as a service like Netflix would: it displays the seasons it either has access to display through on-demand, or when its airtime will be. This is something that Sling doesn't do very well. Sling's interface is focused on live TV, as the Cloud DVR is an add-on package. This focus means gaining access to a show's on-demand library is not intuitive. You either have to do a search for it specifically, or you have to switch your guide view from grid to channels. Once you select the channel that carries the show you want to watch, this takes you to the channel's on-demand library, and from there you can access a show on-demand. The user can also favorite a show, so it appears on the "My TV" tab, but this just isn't intuitive. Philo presents content in a binge-friendly way, so if you're on the fence about paying for a linear service, Philo does its best to present it as on-demand as it can. Keep in mind, the DVR only stores for a month, but is unlimited.

In conclusion, while I will miss the programming from WarnerMedia, Comcast, and Disney/Fox, I greatly enjoy spending half for the content I watch more often, with a much cleaner, easier experience. Recently, I've been trying to cut down on unnecessary subscriptions, and found myself wondering if I should still keep Sling. I used the service often, but I didn't see myself using all the channels. Philo is a great option for those looking for linear content. My recommendations for over-the-top linear online cable services goes YouTube TV, then Sling, then Philo. YouTube TV is the best bang-for-your-buck, with local channels, a great channel lineup, and unlimited DVR. However, for me, it didn't have the Viacom channels I wanted, which led me to Sling with no locals, and a 50 hour DVR limit. Which led me to Philo: if I can pay less for more of the channels I want, with a few I wasn't getting with Sling, and a better experience, I'll do it. Philo is a the value champion, where if you can live without the locals and the channels you may be interested in, I recommend it greatly for $20.